The falconry mitten cover is optional in two different designs , the first is traditional geometric design the secondwas designed to have decorative Tuluth Calligraphy framed by the Crescent moon,with the following scriptures from the Koran.

"O mankind! We created you from a single (pair) of a male and a female, and made you into nations and tribes, that you may know each other (not that you may despise each other)." (From the Holy Qur'an: Surah: 49, Ar-Hujurat, Verse: 13.)

Historic uses of the falcon in ancinet art:

Horus the God of the sky was embodied by the image of the Falcon in ancient Egypt. In ancient Egypt the falcon as a symbol became synonymous with leadership and rulers within the culture.

The falcon symbol was found in this context on the Namarh Pallet, 3000 BCE, flying over a field of papyrus.

In later mythology the character of the Egyptian God Horus became the embodiment of the struggle of good against evil in the backbone myth, the Osirus/Isis story of the Egyptian Culture. Horus was the seeker of justice for wrongs done and the avenger of his fathers death at the hands of his evil nemesis Seth. 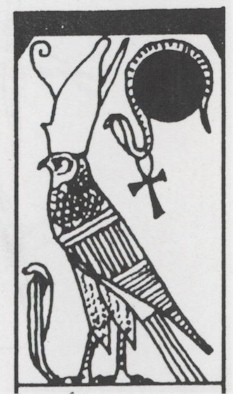 The illustrations above are from the Sixth and Nineteenth dynasties showing that throughout the history of Egypt, for literally thousands of years the Falcon has been a symbol associated with rulers and kings in leadership.

This sculpture is designed to capture the spirit of the Saker Falcon, chief among birds of prey, whose intensity in the pursuit of its prey is not exceeded by any other falcon. Because of the birds will to capture the prey it is sent to pursue, at all costs even to the jeorprody of its own safety, it is my opinion that the Saker Falcon is the natural embodiment of the Spirit of Horus.

The Bedouins and nomadic herdsmen in the deserts of the middle east have kept birds of prey and trained Saker Falcons as part of their hunting arsenal for well over two millennia. The earliest know depiction of a falconer with birds of prey is from the persian Culture and dates to approximately 700 BCE.

Therefore it is no wonder that the Saker falcon is the bird of choice among many middle eastern falconers. This falcon more than any of the other birds of prey is extremely aggressive and will pursue its prey relentlessly, and therefore is the favorite falcon among falconers.

"To Collect a Comstock
is to Own a Classic"

To place an order contact us Inquiries02@artsales.com and an individual sales representative will contact you to assist you with the transaction.